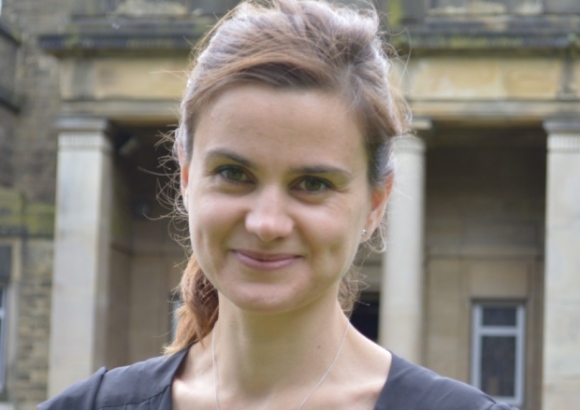 “I find it in poor taste to use the death of an MP to try to score political points in the EU referendum debate.” I was rebuked thus, earlier.

My, but don’t we get prissy and self-righteous, though, when it’s on our own sparkling-white doorstep? When the bodies aren’t Syrian infants but white, privileged British ones? Bit too close to home now, eh? Easier to deny there’s any connection between the murder of an MP by a fascist screaming ‘Britain first/First’ and the sort of politics that have consciously and deliberately fostered that act. Isn’t it?

But relax. Chill. This will be a “lone nutter” as someone said to me, earlier. Because, as we know, Muslim/brown person equals terrorist, savage etc. Because ‘they hate our values,’ don’t they?

White person, though, even a fascist with a gun and a knife, for God’s sake, well, he’ll be a ‘lone nutter.’ Not a product of those ‘values’ eh? Not our ‘values.’ Which is fortunate. Because then we’d have to take a long, hard look at those ‘values’ and the society spawned by them. Wouldn’t we?

So now you know. Stir the racist swamp and monsters emerge. Drip, drip, drip racism, spread anti-immigrant poison, demonise terrified refugees as as “swarm”, dehumanise the Other, do it every day, year in, year out. In the media, from the mouths of politicians. Buy into yourself with your mates down the pub. Until Jo Cox is murdered. Will you stop now? Have you got your country back now?

The sleep of reason produces monsters, indeed. That is where you are correct on this. Was this a ‘lone nutter’? Probably, he seems to have had both a history of mental illness and a history of far right sympathy going back some way. However, it appears that as recently as 2011 he had left behind his flirtation with the far right and was dealing with his issues, even being quite upbeat and positive – giving the following interview to a local paper about volunteering:

“I can honestly say it has done me more good than all the psychotherapy and medication in the world. Many people who suffer from mental illness are socially isolated and disconnected from society, feelings of worthlessness are also common mainly caused by long-term unemployment. All these problems are alleviated by doing voluntary work. Getting out of the house and meeting new people is a good thing, but more important in my view is doing physically demanding and useful labour. When you have finished there is a feeling of achievement which is emotionally rewarding and psychologically fulfilling. For people for whom full-time, paid employment is not possible for a variety of reasons, voluntary work offers a socially positive and therapeutic alternative.”

So what drove this man to this attack? Could it be, possibly, a combination of factors? The volunteering he was doing in 2011 – was he still doing it? Was he one of the victims of the incessant budget cuts of the past few years? Of welfare cuts? Had this left him once again isolated? Had the drip, drip, drip of daily racist anti-immigrant propaganda once again destabilised him? Had he then seen his new MP defending immigration and calling for tolerance to immigrants, whilst he was told daily that his situation was caused by immigrants?