First of all, apologies in advance if anyone’s delicate sensibilities are disturbed by the following.

However, as much as some may find it distasteful, opportunistic and/or an act of callous point-scoring, many of you fragile little flowers have shown no such reticence in rushing to condemn Muslims for Lee Rigby’s murder, immigrants for the near-collapse of the NHS and forecasting a Turkish rape-apocalypse by 75 million, brown-skinned savages, in the highly unlikely event that that country ever qualifies for admission to the EU. As I remarked previously, we are way past matters of taste; the high-horse upon which you precariously sit resembles ever-more a Blackpool nag with broken knees. Your moral high-ground is a straw on the edge of a precipice. We are where we are so let’s deal with that.

With depressing predictability, people have rushed to explain Thomas Mair as, variously, “A lone nutter” “a deviant paranoid personality” and “an individual with mental-health issues.” Some have gone further and in acts of unintentional intelligence-shattering irony have begged we do not tar all far-right, neo-Nazis and white supremacists with the same brush. You simply couldn’t, as the cliché has it, make it up.

Let’s cut to the chase. This act of far-right terrorism is the logical, and entirely predictable, outcome of the nation’s direction of political travel. This is an unavoidable truth and it shames us to try and pretend otherwise. No, Jo Cox’s murder isn’t the fault of the Brexit campaign, per se. After all, our truly toxic and poisonous political atmosphere precedes the EU referendum by many years. Cameron, Osborne and co cannot claim any purity of word or deed simply because Farage, Johnson and co have recently managed to out-racist them. The rhetoric of the OUT campaign is merely the national consensus turned up to 11. They are all culpable; they are all guilty.

If Mair does turn out to have mental issues – as racist apologists and mealy-mouthed right-wingers are desperately scrambling to prove – this doesn’t, in any way, mean his shocking act wasn’t also an act of fascist terrorism. Make no mistake; it was. This terrorist atrocity, by a man with proven links to neo-Nazi organisations, was the inevitable, direct and unavoidable culmination of years and years of racist demonising; of hate-mongering by an inhumane establishment, presiding over a decaying, backward, semi-feudal society, blinded by Empire nostalgia, imperialist arrogance and nothing but utter contempt for the Other.

And no accusations of opportunism or point-scoring can alter that. No cowardly denials, no sophistry, no injured innocence can wash away the simple truth that while Mair plunged in the knife and pulled the trigger, the entire British state, its apparatus, media and representatives are all equally guilty of her murder. 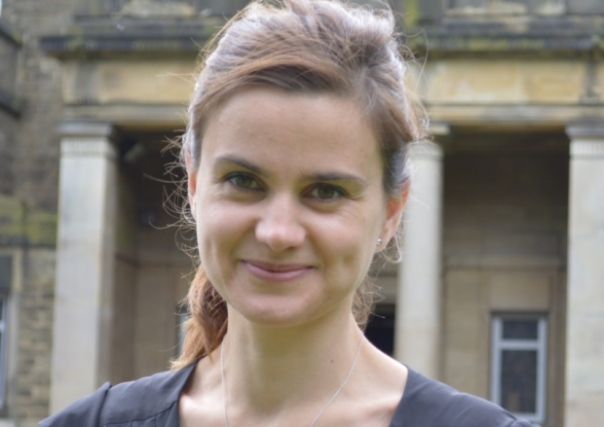 “I find it in poor taste to use the death of an MP to try to score political points in the EU referendum debate.” I was rebuked thus, earlier.

My, but don’t we get prissy and self-righteous, though, when it’s on our own sparkling-white doorstep? When the bodies aren’t Syrian infants but white, privileged British ones? Bit too close to home now, eh? Easier to deny there’s any connection between the murder of an MP by a fascist screaming ‘Britain first/First’ and the sort of politics that have consciously and deliberately fostered that act. Isn’t it?

But relax. Chill. This will be a “lone nutter” as someone said to me, earlier. Because, as we know, Muslim/brown person equals terrorist, savage etc. Because ‘they hate our values,’ don’t they?

White person, though, even a fascist with a gun and a knife, for God’s sake, well, he’ll be a ‘lone nutter.’ Not a product of those ‘values’ eh? Not our ‘values.’ Which is fortunate. Because then we’d have to take a long, hard look at those ‘values’ and the society spawned by them. Wouldn’t we?

So now you know. Stir the racist swamp and monsters emerge. Drip, drip, drip racism, spread anti-immigrant poison, demonise terrified refugees as as “swarm”, dehumanise the Other, do it every day, year in, year out. In the media, from the mouths of politicians. Buy into yourself with your mates down the pub. Until Jo Cox is murdered. Will you stop now?
Have you got your country back now?