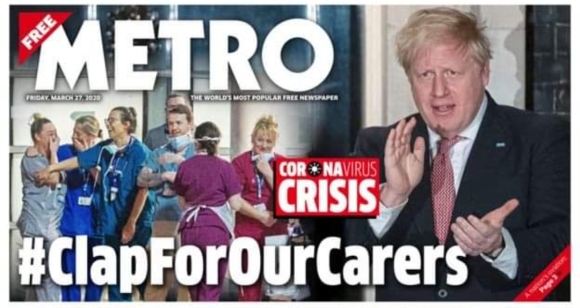 Clapping for the NHS on our street was… interesting. I was thinking of my daughter and her fella, NHS nurses, risking their lives to save others. While choking on the rage and contempt induced by Tory-voting neighbours having the brass neck to join in. These people are morally and materially responsible for the NHS sagging on its knees and my daughter, Lorna, and her partner, Ben, facing increased danger, stress and exhaustion. If any of them were struck down Lorna and Ben would give them 100%. Because they’ve got humanity to spare. Me? Take a wild guess…

Next week, stay the hell inside.

And then there was the Prime Minister. A Conservative Prime Minister. Clapping on the doorstep of 10 Downing Street. On the same day that his government had rejected an opportunity to quickly procure desperately needed ventilators. Because it didn’t fit with their anti-E.U. dogma and denied one of their nom-dom backers the opportunity to make a few quid. An act of brazen and shameless hypocrisy, breathtaking even by the standards of the Conservative Party. These are the people who cheered and jeered and celebrated when nurses were denied a pay rise; whose previous leader, Theresa May, sneered at a desperate nurse “There is no magic money-tree.” Well, as we’ve seen, when it comes to helping the rich there is a veritable orchard at the back of 10 Downing Street. The money is there. It’s always there. The only thing required is the moral will to spend it for the benefit of us all. NHS staff, however, can wear bin-bags and risk death in lieu of the correct PPE. It makes you proud to be British, doesn’t it?

And then there are the sanctimonious fools who tell us that we shouldn’t make the NHS political. The NHS is political and always will be because it is the battlefield on which two radically opposed ideologies fight. The Tories despise the NHS; they hate it. They voted against its creation every step of the way and it’s why they’ve sliced-and-diced and privatised and underfunded it at every opportunity since. Because it is an affront to everything that is fundamental to the Tory party; that everything, even our very lives, should only ever be an opportunity for someone to make a profit.

It was created and should be defended ferociously for the simple moral truth that the right to be alive should not be allocated according to the depth of people’s pockets. It’s the most meaningless and stupid thing to say it shouldn’t be politicised. Yes, the Tories would love that, wouldn’t they? To reduce the NHS to purely a question of affordability; to strip it of its totemic power as a signpost to an entirely different way for humanity to organise itself; common ownership based on the needs of the many, not the profit of a few.

Sadly, England is stuffed with spiteful and terminally stupid forelock-tuggers. People who, consistently at every opportunity, prefer to bite the hand that feeds them but lick the boots that kick them. If Boris Johnson wrapped COVID-19 in a Union Jack, England’s bootlickers would slurp it up off a toilet seat in Wuhan fishmarket faster than they’d vote for taxing their beloved masters properly to fund the NHS.

So clap all you like, Tory stooges. Indulge in your insincere virtue-signalling and your shallow and meaningless public displays but let’s leave the last word to Ben, a community nurse from Nottingham: “Appreciate the applause but if we could all vote for a political party that properly funds the NHS that would be an even better show of appreciation…”