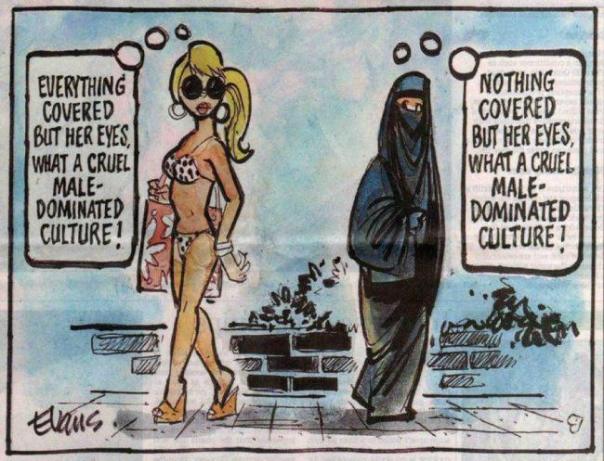 Jim’s not keen on the burka. He thinks – the verb ‘thinks’ is used very loosely here, you understand –  and I quote: “ I have nothing against Muslim religion but feel wearing burka is very wrong it is demeaning of women.”

His attitude toward the burqa is most instructive. One that seems to be shared by a number of non-Muslim, white anglo-saxon men.

For example, one was most amused to see a number of anti-burka posts on the Facebook page of a rugby club. Again, these paragons of radical feminism, as rugby clubs are wont to be, were greatly offended by the oppression of their sisters in struggle that the burqa, clearly, represented. I’m sure we can all take comfort, not least campaigners against the sexual harassment of women, that in between rousing beer-fuelled choruses of ‘get your tits out for the lads’  that stout fellows in rugby clubs nationwide are doing their bit for female emancipation.

Equally, those implacable opponents of Islam, and that faith’s suppression of its female adherents, in the English Defence League (or what’s left of it) see no contradiction in boasting a membership comprising rapists and child abusers.

Britain First, too, while standing valiantly against the misogyny and sexism of the Islamic faith would be offended if the anti-women antics of its leader were pointed out. After all, it would be churlish to mention that the most fundamental aspect of women’s freedom would be the freedom to control their own bodies, sexuality and fertility. So intimidating and harassing women outside abortion clinics is fine as long as it’s BF Fuhrer Paul Golding doing so and not those dodgy brown Muslim types.

Yes, even the most right-wing troglodyte seems compelled to channel their inner Julie Bindel when it comes to the burqa. It’s not Islamophobia, though, is it? No, perish the thought. Nor racism, either. Of course not; they’re not racist but…

Men are men all over the world, though. And one thing a religious lunatic, of whatever faith, has in common with his white, Western, secular counterpart is a desire to control women. The song remains the same; men telling women what they can and can’t wear. Men telling rape victims that they asked for it because of the length of their skirts and then telling Muslim women that their traditional garb is an offensive symbol of reactionary oppression. White western men defending page 3 topless models because it’s ‘their choice, innit?’ but denying even the possibility that Muslim women can decide to make an entirely different choice. Patriarchal white men critiquing their daughters’ outfits for a night on the town, while railing against poor downtrodden Muslim women forced into covering up by controlling fundamentalist nutters.

The emancipation of women is not best achieved by states imposing bans on what women may or may not wear. Still less will it be won by racist, sexist men covering their Islamophobia with a wafer-thin veneer of ‘feminism.’

Don’t you just love the smell of hypocrisy that floats in on the breeze whenever Islam becomes the topic of conversation?

1 thought on “Get Your Face Out for The Lads”