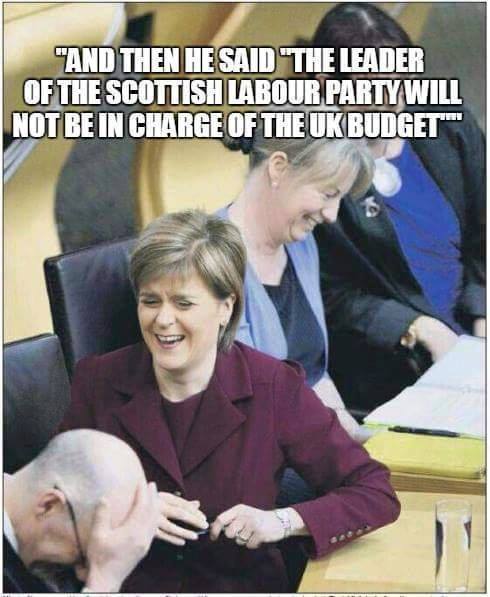 The madness that is Manifesto Week continues.

The traditional pre-election day dog-and-pony show, which no one should take too seriously, has underlined, yet again, just how surreal British politics has become.

The Jellyfish and his gang pleaded with business and the bosses to heed their earnest entreaties that they’d be the party of “fiscal responsibility.” Cuts would indeed continue, austerity is now a long-term tenant and those sensible Labour chaps would take every measure to calm the fears and nerves of those in the City and in the UK’s boardrooms.

At the same time The Eton Rifle’s cold class warriors asserted their intention to be the party of “working people”, a term no less sickly and patronising than Labour’s “working families.” Thatcher’s right-to-buy scheme would be extended, thirty hours per week of free childcare for three and four year olds would be on offer and Thatcher’s hideous “share-owning democracy” would be alive and well under the Tories.

Of course, we well know that only one of these parties is telling the truth and, sadly, it’s Labour. A point rather starkly made when Scottish Labour’s Jim Murphy assured voters that under Labour there would be no need for further cuts. If an end to austerity was what voters desired, well, no need to vote SNP; Labour, both its Anglo and Caledonian expressions, would sort that out for you.

The Jellyfish must surely have been aghast. Lest his prostration before the high priests of capital be in vain, boot-boy Chuka Umunna was dispatched to correct this deviation from the line. Reassuring the London bean-counters, contrary to Murphy’s increasingly desperate and plot-unravelling ravings, Labour’s Business Secretary cut Jimbo off at the knees. Umunna, a man with all the humanity and class-partisanship of an Excel spreadsheet stated firmly that cuts would continue. Before coolly, and with just the hint of a smirk, pointing out that “the leader of the Scottish Labour Party will not be in charge of the UK budget.” Only one of them is telling the truth and it certainly isn’t Murphy, who spent the following day in hiding, refusing to give any media interviews. In the unlikely event of anyone searching for a time to be sorry for Jimbo, this is about as close as it gets.

Meanwhile, the launch of the Tory manifesto gave The Eton Rifle the chance to pretend that the last five years didn’t happen. Forget the punitive, literally death-inducing, sanctions of the sick and disabled, subsistence-level wages, an entire generation of young people shut out of the housing market, rocketing numbers of food banks, soaring child poverty and full-time workers claiming more benefits than the unemployed, The Eton Rifle had a jolly wheeze in store. A reheated Thatcherism would liberate the working class and enable us all to share in the largesse naturally generated by unfettered free-market neoliberalism.

The Grubby Chancer and his Fib Dems, unquestioningly an unscrupulous and thoroughly nasty clot on an already diseased body politic, demonstrated, once more, an almost inhuman absence of shame.  Begging the electorate to allow him to continue in his role as bridesmaid, to whichever of the two vying brides ends up waltzing down the aisle to Downing Street, The Grubby Chancer was breathtaking.

He would, we were told, provide the Tories with a heart and Labour with a head, should the Fibs continue as coalition partners. A pithy sound-bite, to be sure, but one that will – please, God – gain no traction after a term spent licking Tory boots in between their periodic kicking of the poor and huddled masses.

The Green Party manifesto was met with predictable derision and hostility. After all, how outrageous to include a minimum wage that might actually lift the peasantry from economic serfdom, force the rich to shoulder some social responsibility and rid the UK of Trident. Bat-shit crazy, right?

And so to The Racist. A manifesto almost as long in the making as Guns ‘n’ Roses’ Chinese Democracy album, it was inevitable Farage’s treatise would underwhelm. What was unexpected, however, was hearing the party’s Suzanne Evans defend attacks from the right, while discussing her mob’s policy on immigration, on BBC Radio 5 Live, yesterday afternoon.

In closing, it’s a timely moment to consider Marx. Groucho, that is; not Karl. The comic genius once said that “Politics is the art of looking for trouble, finding it everywhere, diagnosing it incorrectly and applying the wrong remedies.” Let’s leave it there…

Thanks to Eddie Truman for the meme.

Clegg’s line conjures up, as I believe it was intended to do, Labour’s clueless scarecrow and the heartless Tory tin man.
Of course that still leaves several important roles to be filled before rehearsals for Westminster Theatre’s four year production of the Wizard of Oz can begin;

We have the cowardly lion who has lost his courage, very suitable for Clegg, the leader of a party the colour of school custard, however, the casting director still has one eye on Ed, possibly a dual role. Obviously that would involve a lot of costume changes but the Millipede has all the limbs one could need to change hats to suit the audience and remain unconvincing in all roles, and he’d still have a few spare to juggle a couple of dancing girls and stab his brother in the back, like a true Shakespearean villain, so maybe it could work. Cleggy doesn’t have enough bark let alone enough bite for the role of the terrier, so we can rule him out of playing Toto, … that just leaves Dorothy or the Wicked Which?

I know you had Nicola Sturdgeon in mind, and the red shoes would look good on her feet, but really, relax, all that heel clicking and that ‘Take me back to Kansas’ stuff, it’s too right wing, even for a man who’s become very familiar with the daily grind of the left against the right over the last five years as he’s walked behind the mocking buttocks of the director, Mr Cameron. Having ploughed that lonely and unpleasant furrow so doggedly, I think we can both agree that although Clegg isn’t what you might call wicked, in any sense of the word, he certainly has the nose for the job.

Excellent. Yes, the WOO metaphor was definitely intended by Clegg and it opened up all manner of tempting explorations to me.
I resisted, successfully, due to self-imposed word-count restrictions.
Satisfying, then, to see it so well-tackled by your own bad self.