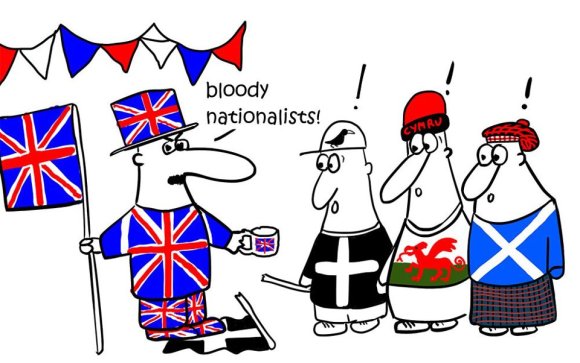 Following the appearance of Plan B on Labour’s campaign trail, last week, Labour’s heavyweights of yesteryear continue to give us their twa bob’s worth. When your narrator uses the term ‘heavyweight’ you’d be forgiven for assuming this is meant in the political sense; to imply authority, credibility, and gravitas. Sadly, in the case presented here, a more literal interpretation edges the reader closer to accuracy.

Judging matters purely on his column in Sunday’s Mirror, respect for the truth concerning I’actualité politique is evidently something with which the former Deputy Prime Minister is unconcerned.

Rehashing the recent smear of the First Minister, Two Jags effectively accused the French diplomats involved in the incident of lying. Desperate stuff indeed. His use of the term “Frenchman” was also instructive; the condescension and dismissive inelegance of the phrase matched only by its inaccuracy. Indeed, by most commonly accepted definitions of the word, the diplomat to whom the crassly blundering Two Jags referred was, in fact, female.

Pushing bravely on he likened Nicola Sturgeon to Margaret Thatcher, a comparison which could only induce tears of laughter or gasps of incredulity. Perhaps both. Given that his former laird and master, Plan B, was described by Thatcher herself as her “greatest achievement” this was the sort of nonsense that went beyond hypocrisy and into terrain hitherto occupied by only the most hysterical.

It is, however, par for the course, as they say. While Scottish Labour has exerted solar-grade quantities of energy in a hopeless bid to convince Scotland’s voters that a vote for the SNP is a vote for the Tories, Her Majesty’s loyal opposition are now pleading with voters to vote ‘tactically’ for the actual Tories, in a hopeless bid to stem the SNP rise. Plots have been well and truly misplaced in that increasingly bizarre place that is Labour’s North British branch office.

Today’s Mirror followed Two Jags’ demented havers with a front-page photo of The Jellyfish striving for his most statesman-like presentation. Incredibly, the headline read ‘My Pledge.’ Viewers in Scotland might wish to file The Jellyfish’s ‘Pledge’ alongside ‘the cheque’s in the post’ ‘the dog ate my homework’ and, of course, ‘The Vow.’

By contrast, The Independent gave space to Mz. Sturgeon. Space used wisely to impress, yet again, just how far the distance in class between her and her rivals stretches. Your narrator happily confesses to a certain subjectivity where the SNP, in general, and Mz. Sturgeon, in particular, are concerned. Nevertheless her assertion that “Labour’s answer in Scotland is not to represent the social democratic values their former voters support, but to mimic the Tory austerity they wrongly believe voters in England back” is impossible to dispute.

The reality is that Sturgeon’s insurgents represent a clearly progressive anti-austerity alternative that not only appeals to the majority of the electorate in Scotland, but, increasingly, to English voters, too. Illusions in bourgeois politicians and parties are foolish things to entertain, of course. Yet the SNP offers an end to Trident, the break-up of the Brit state and the slim possibility of dragging Labour onto the sort of turf for which its left-wing would have us believe their party was historically intended.

While The Jellyfish has explicitly ruled out a coalition with the SNP, it’s interesting to note he has done no such thing where the Tories are concerned. Also, speculation at the weekend, prompted perhaps by little more than bored hacks at The Independent with only thumbs to twiddle, nevertheless concerned a possible favourable reaction from Labour’s high command to the possibility of a coalition with The Grubby Chancer’s Fib Dems.

So what’s the problem, we might well ask, for Labour’s English lefties? Could it be that the vicious and blinding tribalism infecting Murphy’s mob is not simply a Scottish phenomenon?

Meanwhile Common Space’s Michael Gray reports on Ed Balls’ commitment to cut public spending across all the UK, which entirely contradicts Jim Murphy’s protestations that “there don’t have to be any further cuts.”