A most agreeable little hostelry, I arrived early evening to be greeted by the very genial hosts. The décor and facilities were extremely well suited to a person of my size, age and proclivities. The wood floor in the main living area, in particular, was simply magnificent. My baby-walker achieved speeds of hitherto unmatched extremity. Most exhilarating.

Dinner followed and the hosts maintain, it must be said, an excellent kitchen. I had toast to start followed by an inarguably sumptuous cottage pie. Both the texture and consistency were quite to my tastes. As one knows, often a mid-meal pooh is required. The amiable elderly lady who attended on me provided first-class service. Nappy was quickly changed and the cleansing process was unobtrusive and, indeed, actually fairly pleasant (NOTE: inform my staff to procure some of those particular brand of delightful wet wipes).

After dinner entertainment was pleasant and one couldn’t fault the choice on offer. Shape-sorters, contraptions given to intriguing sounds and the sort of cognitive challenges a young lady finds delightful were plentiful.

After dinner bathing was a particular highlight, with the servants at pains to maximise my enjoyment. An unusual sort of cabaret was enacted by the proprietors involving song, some sort of strange dance and what can only be described as gurning. I quickly discovered the occasional smile impelled the duo to still greater efforts. 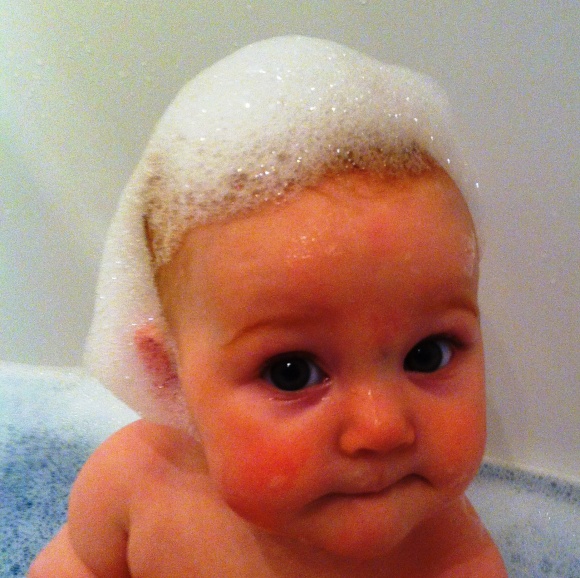 My boudoir was faultless in all respects but the nocturnal restlessness with which I’m often afflicted sadly made an appearance. No matter; I decided to jump in with mein hosts. Some may consider such actions a tad forward, perhaps a little on the intrusive side, but both parties reacted with the amenable demeanour one often encounters in those of the lower orders.

During the night, I was also, several times, disposed toward conversation and despite there being something of a language barrier the landlady and her good man attended to my wants. Strangely, their custom appeared to be to converse with eyes closed. Odd but this did not impact on my pleasure in any way.

Breakfast was toast, milk and porridge and while the latter was perfectly acceptable I found the absence of salt and whisky in the mix a peculiar thing. Grand Papa tells me that our people favour this recipe but that its consumption is not considered seemly for a young lady of my years.

To sum up, a splendid stay with catering, personal services and entertainment provided around the clock. That my hosts provided all this with just the efforts of themselves proves another of Papas’s contentions; that the lower orders require little or no sleep. Interesting. But of no import. I shall return! I have no hesitation in recommending to my peers such a charming little hostelry for the purposes of a young lady’s pleasure, relaxation and entertainment.